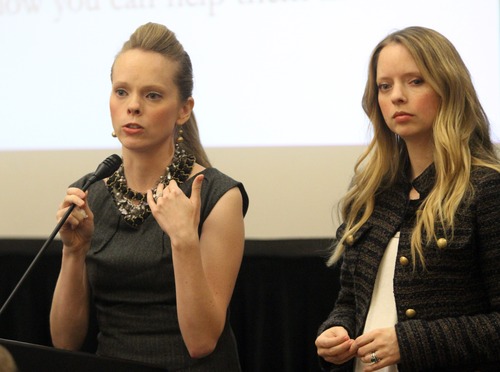 The classically trained pianists, two-fifths of the famed 5 Browns, were the center of attention Wednesday as they spoke about their experience as survivors of sexual abuse.

“I can stand before you five years after coming forward and make it seem so simple,” Desirae Brown told a crowd Wednesday. But it was not, and it has been a long, hard road, she said.

The sisters discussed healing and having the courage to move forward despite being victims of child sexual abuse at the hands of their father — Keith Scott Brown, who is now serving 10 years to life in the Utah State Prison. His first parole hearing is in April 2018.

If someone suspects a person may be a victim of sexual abuse or notices changes in their behavior, the sisters told educators, therapists, law enforcement and members of the Department of Child and Family Services who attended to follow their intuition and talk directly to the victim.

The women said after they came forward about the abuse, acquaintances told them they suspected something was wrong between the daughters and their father, but had never said a word. Desirae Brown quoted Elie Wiesel, a Holocaust survivor, saying, “We must always take sides. Neutrality helps the oppressor, never the victim. Silence encourages the tormentor, never the tormented.”

The typical sex offender isn’t some monster in a dark alley, the daughters realized. “They are so non-assuming and so charming,” Desirae Brown said, adding that the”white collar crime” allows a seemingly “clean-cut, all-American guy” access to victims again and again.

Deondra Brown said the abuse may leave victims with flashbacks, nightmares, trust issues and affects their physical and mental health. She likened the abuse to a cancer brewing underneath the surface that, if not addressed, “will fester and waste away the wonderful things in our life.”

“We may appear to be normal functioning adults, but really we are trying to put our lives back together, one day at a time,” Deondra Brown told the crowd as she emotionally drew her hand to her heart.

The sisters hope to remove the stigma from victims of abuseso they feel comfortable coming forward. The youngest sister, Melody Brown — who was also abused by her father— supports their cause, but was not able to attend.

The women said one in four girls and one in five boys are sexually abused and out of those 80 percent are abused by a family member. Desirae Brown said because the majority of cases involve family you have one of the hardest decisions to make. It can take victims up to 20 years to come forward, if at all.

“In order to seek justice, you have to turn on your own,” she said.

At that time, friends of the family also chose sides, and some extended family members didn’t support her. But she said she never wanted to regret not doing the right thing to protect others, despite the rumors that would rage, or how it might change her reputation or the career she had worked her life to build.

Deondra Brown said “sometimes you have to be your own hero,” have courage and not let someone else steal your life.

“His horrible acts against an innocent child should not define me. I define me,” she said as her voice cracked and she began to wipe the tears. “I am a survivor and I will hold my head high.”

Desirae Brown offered steps to recovery involving hope, finding justice, finding strength to prosecute and healing. The two also said counseling was key to filtering what was right and true.

“Talking about it is the first sign of breaking free of the abuser’s control,” she said.

After the conference the sisters told The Tribunethey wished their parents, school and church would have defined for them what was inappropriate behavior. But with the support of their spouses, they began to understand what they had experienced as children wasn’t something every child goes through.

“I started to realize there were things that weren’t right,” Desirae Brown said.

Desirae Brown will be a parent for the first time with a daughter due in January and said she will educate her about what she didn’t learn.

As the oldest sister, Desirae Brown felt she had to take the lead and directly confronted Deondra Brown to see if she suffered the same abuse.

“Once we found out it had happened to each other, staying quiet was no longer an option,” she said.

When it comes to getting through the emotional pain, the sisters don’t mention their parents, they say it is the support of siblings, faith in God and their husbands that sustains them.

The sisters have started a nonprofit foundation to help others. They are working to remove the federal statute of limitations for the crime of sexual abuse.

The Browns were the first sibling quintet to study at the famed Julliard School in New York City.

The 5 Browns — made up of siblings Desirae, Deondra, Gregory, Melody and Ryan — went on to produce successful classical-music albums and make appearances on “The Oprah Winfrey Show” and “60 Minutes.”

The 5 Browns plan to start working on another CD again next year and continue touring.