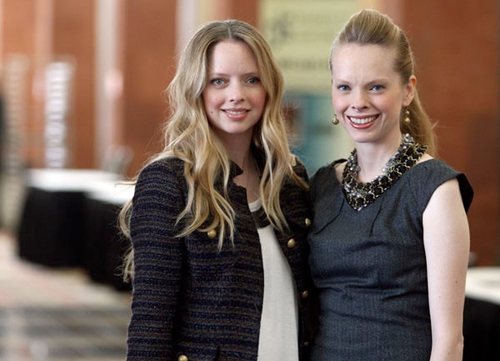 More about Deondra and Desirae

The Brown sisters both received their Bachelor and Masters Degrees from The Juilliard School in New York City, studying with Yoheved Kaplinsky. They tour extensively and have performed in numerous venues across the world, including Carnegie Hall’s Isaac Stern Auditorium, The Lincoln Center’s Alice Tully Hall, the Grand National Theater in China, Suntory Hall in Japan, The Kimmel Center in Philadelphia, and Symphony Hall in Chicago. They have also soloed with, among others, the Chicago Symphony Orchestra, the National Symphony Orchestra, and the Philadelphia Orchestra.

They and their group have garnered extensive media coverage, including appearances on The Tonight Show with Jay Leno, Oprah, Good Morning America, The Today Show, The View, The Martha Stewart Show, Piers Morgan: Live and NPR’s Performance Today, as well as in the New York Times, Parade, People, Clavier, the Los Angeles Times, the Sunday London Telegraph, and Entertainment Weekly.

Deondra and Desirae Brown have performed over 500 concerts across the United States and around the world as soloists, duo pianists, and members of the piano chamber group, The 5 Browns. They are exclusive Steinway Artists and have released four albums on the RCA Red Seal/Sony BMG Masterworks label, and an album on the E1 Entertainment/Epic record label. The 5 Browns’ most recent album, The Rite of Spring, can be found on the Steinway & Sons label — a live performance premiere of Stravinsky’s epic work arranged for five pianos.

Foundation for Survivors of Abuse (FSA) was founded by Deondra and Desirae to create a face for victims of sexual abuse everywhere. They are involved in a nationwide media campaign to highlight these important issues and promote victims’ rights, and are collaborating with notable lawyer and abuse activist, Marci Hamilton. The sisters worked closely with lawmakers across the aisle to promote the passage of legislation in Utah requiring child sexual abuse prevention be taught in elementary schools. Deondra and Desirae also work with The Utah Division of Child and Family Services and the state’s Attorney General’s Office to help develop, and be the spokespersons for, a media campaign to encourage the reporting of child sexual abuse. They received the HateBrakers award from New Conscience, Inc., along with awards from The Heritage School of Utah (providers of education in a safe environment for teenagers from troubled homes), The Family Support Center of Utah, and Rape Crisis Center of Utah. Deondra also serves as a member of the “Champions Committee” for Prevent Child Abuse Utah.