The 5 Browns Speak Out About Their Sex Abuse Ordeal: Exclusive 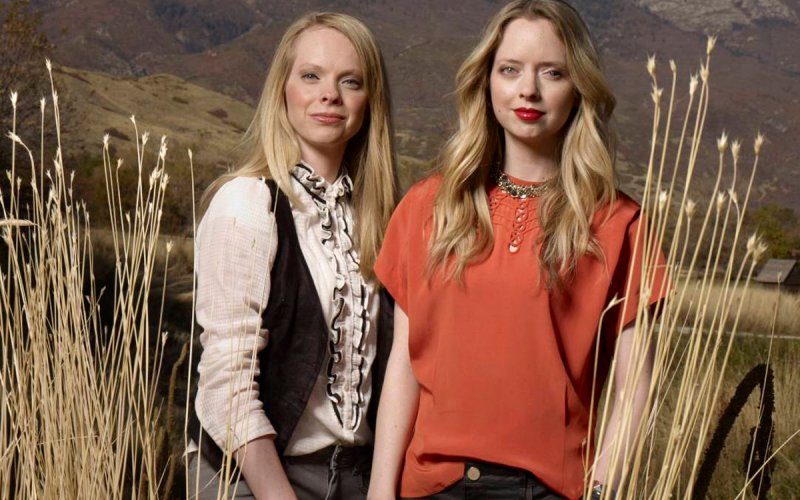 With their father, Keith Brown, behind bars for molesting them as children, sisters Desirae and Deondra Brown of the classical quintet talk publicly for the first time about their ordeal, how their family reacted to the news, their father’s denials—and why they went to the police.

CHRISTINE PELISEK at The Daily Beast

Child victims of sexual abuse often struggle for years before being able to divulge what was done to them—if they can speak about it at all. Shame, isolation, and the fear of not being believed are among the reasons victims may be rendered mute by such devastatingly destructive acts. Such was the case with Desirae, Deondra, and Melody Brown, the three female members of the famed piano troupe the 5 Browns. Their decision to bring charges against their father and manager, Keith Brown, came more than a decade after his long-term pattern of sexual abuse ended—and only after much renewed pain and soul-searching.

In the end, their courage won out.

Today, Desirae is 32, Deondra 31, and Melody 27. Each was first molested by their father before the age of 14.

Until just a few years ago, the sisters had never revealed the abuse even to each other. “Pedophiles are so skilled at isolating their victims—making you feel like you are the only one in the world and you can’t talk to anyone about this,” Desirae told The Daily Beast in an exclusive interview, the first time the daughters have spoken publicly about their ordeal. She and Deondra met with me in Alpine, Utah, the small city in which they were reared, along with their two brothers, in a close-knit Mormon community. The brothers, Greg and Ryan, were also present, while Melody, although deeply supportive of her sisters, chose not to participate in the interview. Desirae and Deondra said they didn’t want to speak about their mother, Lisa, who is still married to their father. But they were willing and indeed determined to talk about their father, Keith Brown, who is serving a term of 10 years to life in a prison facility just a short drive from where we had arranged to meet. The daughters said they hope their story will reassure other victims of child sexual abuse that they are not alone—and that what happened is not their fault.

“I was worried our family would get torn apart,” Desirae recalled of her adolescent sense of powerlessness and desperation. “Even as a kid, you realize if your parents go to prison you are going to be put in foster care, and I didn’t want to be taken away from my siblings. It all seems so scary, and so it paralyzes you.”

“It is a part of you that becomes damaged—you just shove it away into some back closet somewhere and you try to move on with your life,” said Deondra.

Brown was a textbook example of an “opportunistic situational sex offender,” according to Deputy Utah County Attorney Dave Sturgill, who prosecuted the patriarch.

“They will go after whomever they think is vulnerable and won’t disclose the abuse,” Sturgill said. “It’s a ‘grooming’ process, where they take the time to see how the kid will respond and in the process become more and more intimate. Sex abuse is a crime of secrecy.”

The lifestyle of the five young Brown children may have contributed to the girls’ vulnerability. They were home-schooled and began strictly supervised piano lessons at the age of 3. (By age 9, each had performed with a major symphony orchestra.) Lisa, who had hoped to become an opera singer, organized their practice schedules, while Keith, a strict disciplinarian, handled the academics and also coached his sons’ baseball teams. There was little time for friends and outside activities, the daughters recalled, and their all-consuming goal was to be accepted at the famed Juilliard School of Music in New York. For the girls, it would mean not simply success but also an escape from their father.

All five Browns were accepted consecutively at Juilliard, a first in the school’s history. Both the older daughters left for New York in 1997. Melody, several years their junior, remained at home.

Before the sex-abuse allegations dominated national headlines, the 5 Browns were known as wholesome Mormon prodigies, and their father was widely respected as a self-made talent manager. (He developed a penchant for expensive cars, and one bore the license plate JULIARD.) The troupe signed a five-CD deal with BMG Classics/RCA Red Seal in 2005, and that same year their first album, The 5 Browns, rose to the top of the Billboard classical chart. They toured. They were written up in The New York Times and People. They were interviewed on Oprah, Good Morning America, and The Tonight Show with Jay Leno. Their eclectic range became a trademark: a mix of classical piano compositions, Gershwin, and soundtrack hits from movies like Star Wars and Alfred Hitchcock’s Vertigo.

Desirae characterized her relationship with her father as “uncomfortable, and it always was uncomfortable.” But during all those years, no one seemed to suspect the abuse, the sisters said—nor did they realize they were all victims. The first breakthrough came in 2007, when they admitted to each other what had happened. “When I found out about my sisters—all of a sudden it gave us the courage to confront our father, to defend each other,” said Desirae. They also told their brothers, and together the 5 Browns fired Keith as their manager.

Ryan Brown, the youngest of the siblings, said he had felt physically sick when he learned about the abuse. “I felt like I was going to throw up,” said the 26-year-old. “It was hard for me to hear that these things had happened. I looked up to my dad. He was my hero.”

The decision to confront their father came at a high emotional price, the daughters recalled. Their own credibility was called into question when Keith denied the accusations and some members of their extended family and others took his side. “It almost broke us to know that we didn’t get the support from people we had loved and respected our whole lives,” said Desirae. Deondra added that one important lesson they learned was how quickly the victims are put on trial. “It is something for other survivors to realize,” she said. “[Abusers] will try to make you feel like it is not a big deal. They will try to get people around you to think it is not a big deal. They will lie to the law. You are going to have to stand by what you believe is the truth.”

Initially, though, the daughters didn’t want to go to legal authorities. They believed the best outcome would be for their father to admit his crimes to his ecclesiastical leader, and they clung to the hope that he would take this step for the sake of the family. “There is a Mormon concept called repentance, where you change your heart and your life,” said Kimball Thomson, a 5 Browns spokesman and friend. “It’s a huge commitment. You try to make right the damage you caused.”

“We gave my Dad a year, a year and a half, to try and change into a better person,” said Desirae. “We didn’t give him an exact time limit. We were optimistic. We thought he would change.”

Brown finally did admit the abuse to his church hierarchy, said Thomson, adding that a disciplinary hearing—a standard procedure—would have been held to decide if Brown would be excommunicated. It is unclear what actions, if any, were taken against Brown by the church, as such hearings are private.

The matter might have ended there, had the daughters not learned from a family friend that their father planned to set himself up again as a manager and to work with young women and girls.

“That was what brought us to the point of prosecuting him,” said Desirae, adding, “abusers are just selfish. In the end, they only want what they want.” The time had come to seek justice through legal channels.

“For me, that moment [of decision] happened in prayer, very privately,” said Desirae.

“I just knew it was the right thing to do, although it was hopefully the hardest decision I will ever have to make in my life,” said Deondra. “There was no question in my mind what needed to happen.”

This time, the daughters didn’t apprise their father of their intentions.

An anxious period followed, as the daughters tried to ascertain whether they still could bring charges related to events that had occurred almost two decades earlier.

“It was a scary process,” said Desirae. “Can we? Can’t we? We first heard back from lawyers: Oh no, you can’t do it. Maybe your younger sister can. Or wait, there is this new law. It was so ambiguous. Finally, it came back that we could.” As it turned out, the sisters benefited from a law enacted in Utah in 2008 that eliminated any statute of limitations on the relevant charges.

On May 5, 2010, the Brown sisters contacted the Utah County Attorney’s Office, which passed the case to the Lone Peak Police Department, the police jurisdiction where the bulk of the abuse occurred. Police investigators met with Deondra, Desirae and Melody on June 30; an FBI agent came along as well, because, as the police report states, “some of the abuse may have occurred in other states.”

In early February of this year, Keith Brown pleaded guilty to one first-degree felony count of sodomy and two second-degree felony counts of sexual abuse of a child. He received 10-to-life on the first count and 15-to-life for the other counts. A police report released this fall shows that the extent of the abuse was far greater—police had recommended that prosecutors file more than 600 counts of aggravated sexual abuse per child against Brown.

Still, his daughters had prevailed. “They wanted him to serve at least 10 years,” Deputy County Attorney Sturgill said. He said he has never spoken to Lisa Brown about the case. (Both she and Keith Brown declined to be interviewed for this story.)

Two weeks after their father entered his guilty plea, on Feb. 28, the 5 Browns performed in Logan, Utah, to a sold-out crowd. Greg Brown thanked the fans for an “incredible outpouring of love and support,” adding that while the troupe was going through difficult times, the healing power of music kept them going.

The four Browns who took part in The Daily Beast interview said all the siblings are now in a much better place. While they are still at odds with some family members, they have found comfort in spouses, close friends, and even strangers. “Just two days ago, we got an email from a woman thanking us for our courage in coming forward and putting a face on this issue,” said Desirae. “People have come up to us to say they have been through similar things. Even people we grew up with. There’s a common bond between people who have suffered this.”

As for their father, “I have this period while he is in prison to move on with my life,” said Desirae. “I don’t have to worry about him constantly talking to people I know or my relatives and always trying to tell his side of the story. He is there. He is guilty. He did it. He is registered [as a sex offender]. People will know from now on. They will always be aware, and that was very important to us.”

“We showed as much love and compassion as we could toward a man who took so much from us,” said Deondra. “There is a great sense of satisfaction in knowing that I got through the most destructive time in my life. I was OK.

“You can put your dad in prison and still be a good person,” she added, “though we didn’t put him in prison. He put himself there.”