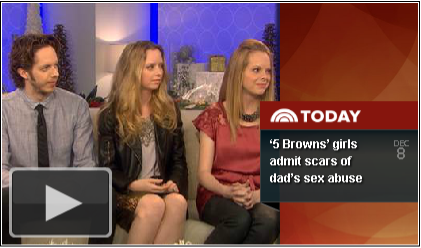 Less than a year after their father was jailed after pleading guilty to sexually abusing his daughters, members of The 5 Browns have spoken about their ordeal and the life-long scars it has left them with.

Deondra, Desirae and Gregory Brown appeared on the Today show in the hope they will inspire other victims of abuse to come forward and to ultimately have the Statute of Limitations for child abuse changed, so there are no time restrictions for victims to come forward.

Daughter Melody, who was also abused at her father’s hands, chose not to appear on the show. (watch the video:)

The 5 Browns are a classical piano group made up of three sisters and two brothers – Melody, Deondra, Desirae, Ryan and Gregory. They were the first family of five siblings to be accepted at the same time into New York’s Juilliard School.  The Utah siblings released three albums that got to number one in the U.S. classical chart. The New York Post described them as ‘the biggest classical music sensation in years’. Entertainment Weekly said they are ‘button-down cute and somewhat otherworldly’. They have performances coming up in New York, New Jersey and Pennsylvania in November – before going to Ohio in December.

When asked what made them want to speak out after they initially tried to hide the story from the media, Desirae said: ‘I think we want to reach out to people and want to change the laws and Statute of Limitations so there are none for victims of childhood sex abuse.

‘Sex abuse within families is so rampant and we want to speak out so people are not ashamed any more. The more people who are aware, the less it will happen.

‘I think abusers make you feel like you shouldn’t tell anyone, they make you embarrassed.’

Deondra said: ‘We’ve been really blessed to have had the support to get through all this and to be able to speak about these horrible things.’

Their brother Gregory revealed that as well as the actual victims, the abuse affects the whole family.

He said: ‘People don’t realise how many other people it affects. But it was important for me to be there for them. It was really a cut and dry situation – you support the victims not the perpetrator.’

The 5 Browns are a Utah piano-playing group consisting of three sisters and two brothers.

They have set up The Foundation for Survivors of Abuse to help those victims come forward and offer support.

Sexually assaulted: The Brown daughters only wanted to see their father jailed for a certain amount of time

They are also hoping to get the backing of some senators to change the Statute of Limitations so that a child does not have to come out about the abuse when they are still living under the same roof as their attacker.

Deondra said: ‘There will be life long scars from abuse suffered and hopefully a child of that age will be able to find that support they need, whether it’s within the home or a foundation or something they can reach towards and find what they need.’

The Brown daughters kept the abuse a secret for years, even from each other, until 2007 when they were discussing separate issues and it came up.

Desirae explains how they broached the issue with their parents to try to deal with it discretely: ‘We approached my father and mother and thought we could deal with it in the family and for him to take full accountability and show extreme remorse. But unfortunately that was lacking in our situation.

‘When he heard he wanted to manage other children, it boiled down to, “If he doesn’t go to prison he could do this to someone else”. The situation has made the five of us closer than ever.’

Unity: Sisters Desirae, left, and Deondra kept the abuse a secret for years, even from each other
Brother: Gregory said it is not just the actual victims who are affected but the whole family

Keith Brown was sentenced to spend ten years to life in prison for the abuse of his daughters after he pleaded guilty in February to one felony count of sodomy and two felony counts of sexual abuse.

Judge David Mortensen sentenced the 55-year-old to ten years to life on the first count, and 15 years to life for each of the others.

He said Brown was a ‘danger to society’ but was given a lighter sentence by the consent of his victims.

His crimes were close to being kept a secret from the public and were only uncovered by the media following a car accident near Salt Lake City that he was involved in just days after he was charged.

Brown drove his Porsche off a road and it fell 300ft into the Little Cottonwood Canyon as he returned from a ski resort on Valentine’s Day with his wife – with police saying he was travelling too fast.

He was driving, and his wife Lisa, the mother of the children, was in the passenger seat. They were both knocked unconscious, but Brown woke up and managed to dial 911.

A spokesman for the 5 Browns told the Salt Lake Tribune they are now focusing on ‘managing their lives, careers and the ongoing healing process’.

Brown’s attorney, Steve Shapiro said: ‘I think he’s remorseful and I think every step he’s taken in the process … has been geared toward taking responsibility.’