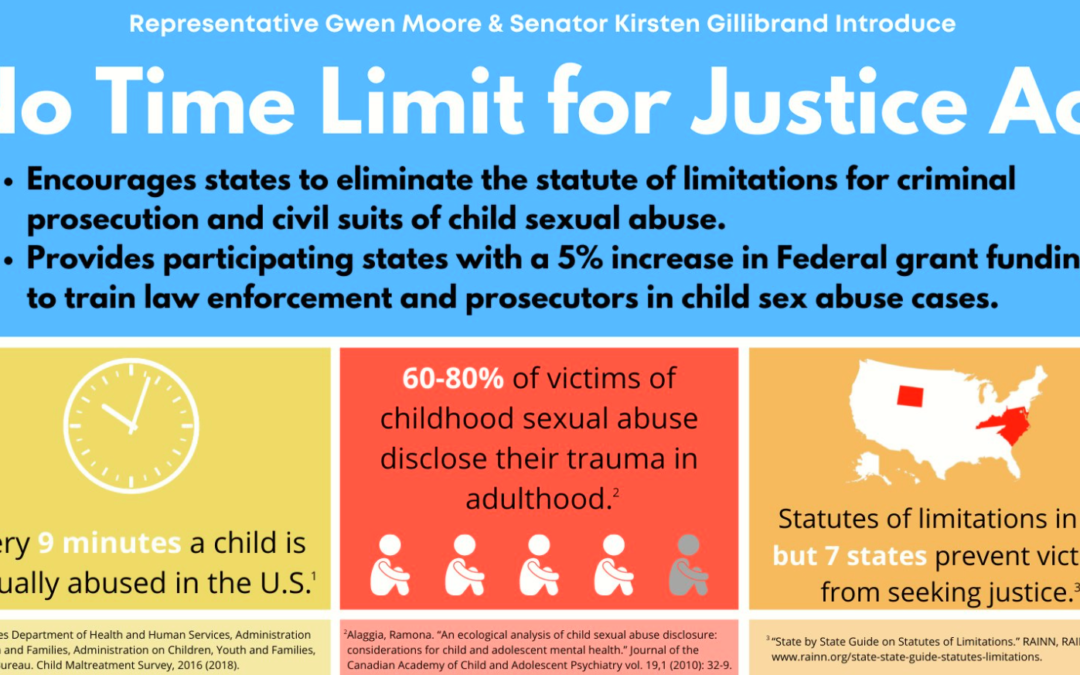 For survivors of childhood sexual abuse, the No Time Limit for Justice Act has been a long time coming. Introduced last month by U.S. Senator Kirsten Gillibrand (D-NY) and U.S. Representative Gwen Moore (D-WI-4), and co-sponsored by Senator Dick Durbin (D-IL), the bill aims to incentivize states to eliminate their statutes of limitations for criminal prosecution and civil suits filed by victims.

These statutes have long been a major obstacle for victims seeking justice. According to the Rape, Abuse & Incest National Network (RAINN), a child in the U.S. is sexually abused every nine minutes – that’s about one in nine girls and one in 53 boys under 18. Yet only 12 percent of these crimes are reported to authorities each year, with the majority – 60-80 percent – reported only later in life. And while the federal criminal code doesn’t impose a statute of limitations for child abuse, the majority of states do – North Carolina, South Carolina, Kentucky, Maryland, Virginia, West Virginia, and Wyoming are the sole exceptions – depriving survivors of the right to seek justice. For instance, Massachusetts sets an age limit of 53 for presenting a case and disallows anything longer than seven years between a public admission and going to court. Perpetrators are protected. Children continue to be endangered.

“Several statutes of limitations on the state level end in as little as three years after the crime is committed, an unreasonably small window for victims to hold their perpetrator accountable,” said Rep. Moore. “By motivating states to end these burdensome legal barriers, we’re allowing victims to [exercise] their basic right to seek justice and to help them heal from enduring trauma.” (newsroom@wlea.net)

The motivation to lift those statutes will come in the form of a five percent increase in federal grants under the Services, Training, Officers, Prosecutors (STOP) Program, which trains both law enforcement and prosecutors handling sexual abuse cases. States will be eligible for this funding if they eliminate their statutes of limitations. But the bill promises so much more than monetary benefits. For survivors previously stymied by the system, the bill, “empowers child abuse victims to seek their day in court on their own terms, whenever they should choose to move forward on their paths toward healing,” Sen. Gillibrand said. (newsroom@wlea.net)